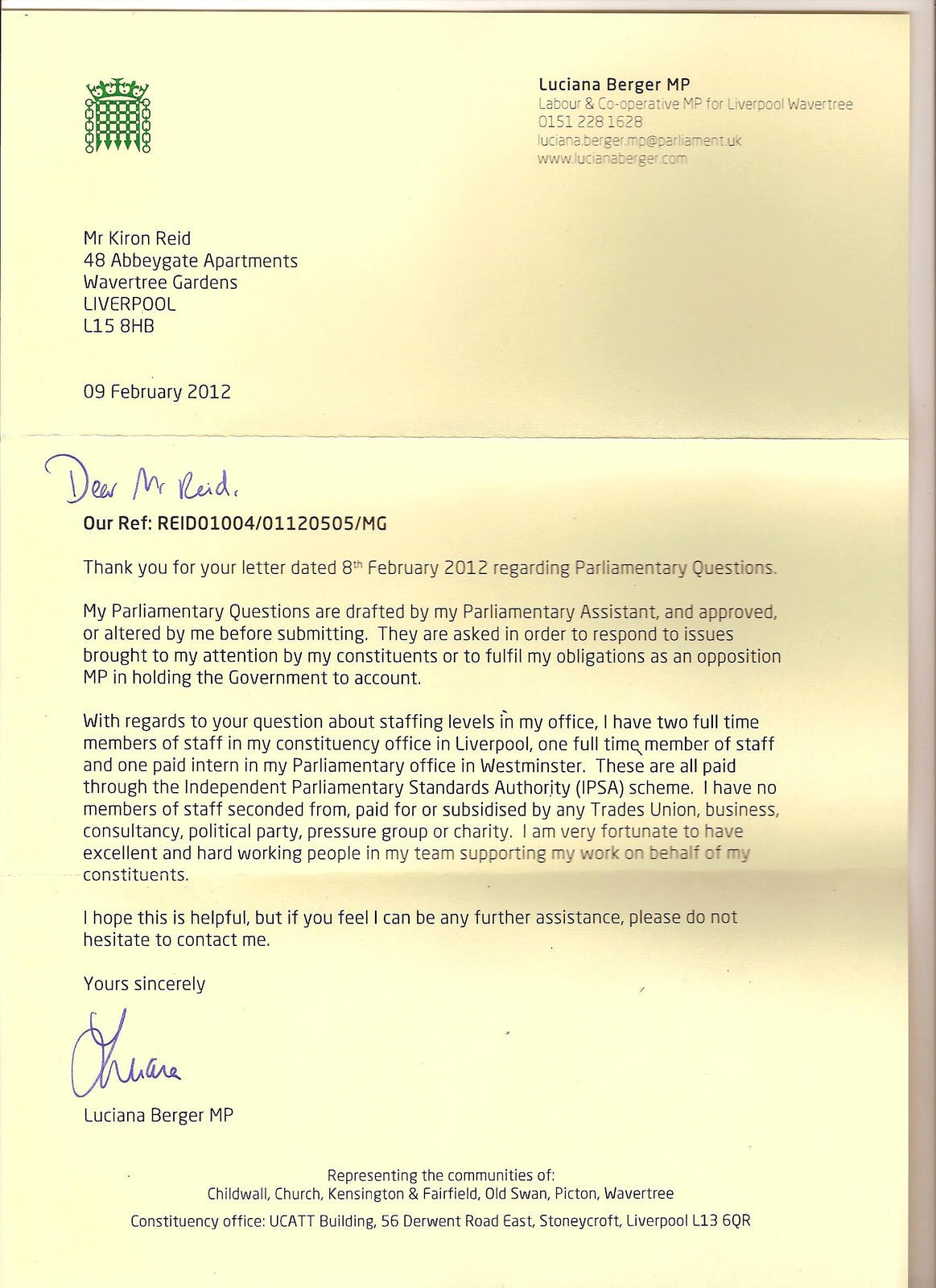 I've been very critical of the Labour MP for Liverpool Wavertree – as a career politician and careerist and someone desperately keen to make an impression rather than learn from experience.

One thing I have apparently been wrong about is in thinking that she asked so many Parliamentary questions that she couldn't possibly write them all herself. In fact it appears that Ms. Berger and her office staff are simply very proficient and hardworking in this respect. I attach correspondence and explained the reasons for my cumbersone letter in telling the story to the leading Merseyside political reporter, David Bartlett as follows (slightly edited to improve the sense).

Luciana Berger seems to ask more questions in Parliament than any other MP. I wasn't very impressed as it seemed to me over her first year to be just about making an impression for herself and very few of the questions seem to be about Wavertree or directly relevant to Liverpool. However she asked some that were, a lot about her Parliamentary portfolio on environmental issues and others on international affairs, topics which I am interested in as well. Many of the questions seem to be about insignificant queries to departments or minor criticisms of the Government, however I realise that small things may add up. It looked to me like these were part of a campaign, possibly about expenses and expenditure. This is a fair target, precocious [hypocritical] of a Labour MP but only a new one could get away with it. I wondered who wrote the questions as Ms. Berger puts down so many that I thought they could not possibly be written by her or her staff or else they would spend all their time doing it. So I presumed they were written by Labour Party or Trades Union or lobbyist staff as part of an organised campaign, probably one organised with other MPs. That might give a false impression of the work rate of our own MPs. [By giving the impression they were doing work that was in fact being done by paid lobbyists or political employees].

So I thought I should ask. I realised it would be easy to evade giving an accurate answer to a simple 'who writes your Parliamentary questions and who do they work for?' so I wrote a very convoluted question which was pedantic but should ensure no evasion. As it happens there was no need.

So it appears the simple answer for my suspicions is that I have an MP with a very high work rate on using the Parliamentary Questions systems to raise a wide variety of interesting topics. If every MP asked as many questions the system would grind to a halt but – like with Chris Davies batting hard for the North West in Brussels – it shows that the work rate of politicians can vary considerably.

My letter is under documents in the Articles and downloads section: 'Enquiry about Luciana Berger MP questions in Parliament.

What would you do Mr. Fisk?
Traffic websites & waste of public money.