The result of the UK General Election 2015. “I can’t believe how terrible the election was.”

Largely based on my comments on Facebook several days after learning of the election results while in Ukraine. The Conservative Party won 51% of the seats with 37% of the vote from only 24% of potential voters.

This tweet showed the unfairness of the British electoral system in all its glory:

How many votes on average it took to elect an MP, as of 11am today. Via @electoralreform

I can’t believe how terrible the election was. For me Labour Party and voter tribalism and a nasty populist press have pushed us to this extreme – along with the rise of populist ‘New progressive’ SNP, and the Lib Dem leadership destroying themselves and our work by early on destroying trust that they never regained. A Conservative majority is really bad given the ideological wing of the party. Ed Milliband was actually a decent intellectual Labour leader, but our public don’t seem to like intellectuals as leaders. In Scotland and in England the largest number of voters have voted for thin ill thought out policies designed to attract votes but in many cases not build a consensus or solve some of our major problems.

The most shocking thing about the night – or the next days – was the maps that appeared on Twitter showing an awful polarisation between Conservative blue in Southern and rural England, Scottish Nationalist Party mustard colour across nearly all of Scotland, Labour in the M62 city and urban belt of the north, in central London and South Wales. An appalling political division of the country into segments of opposed support. 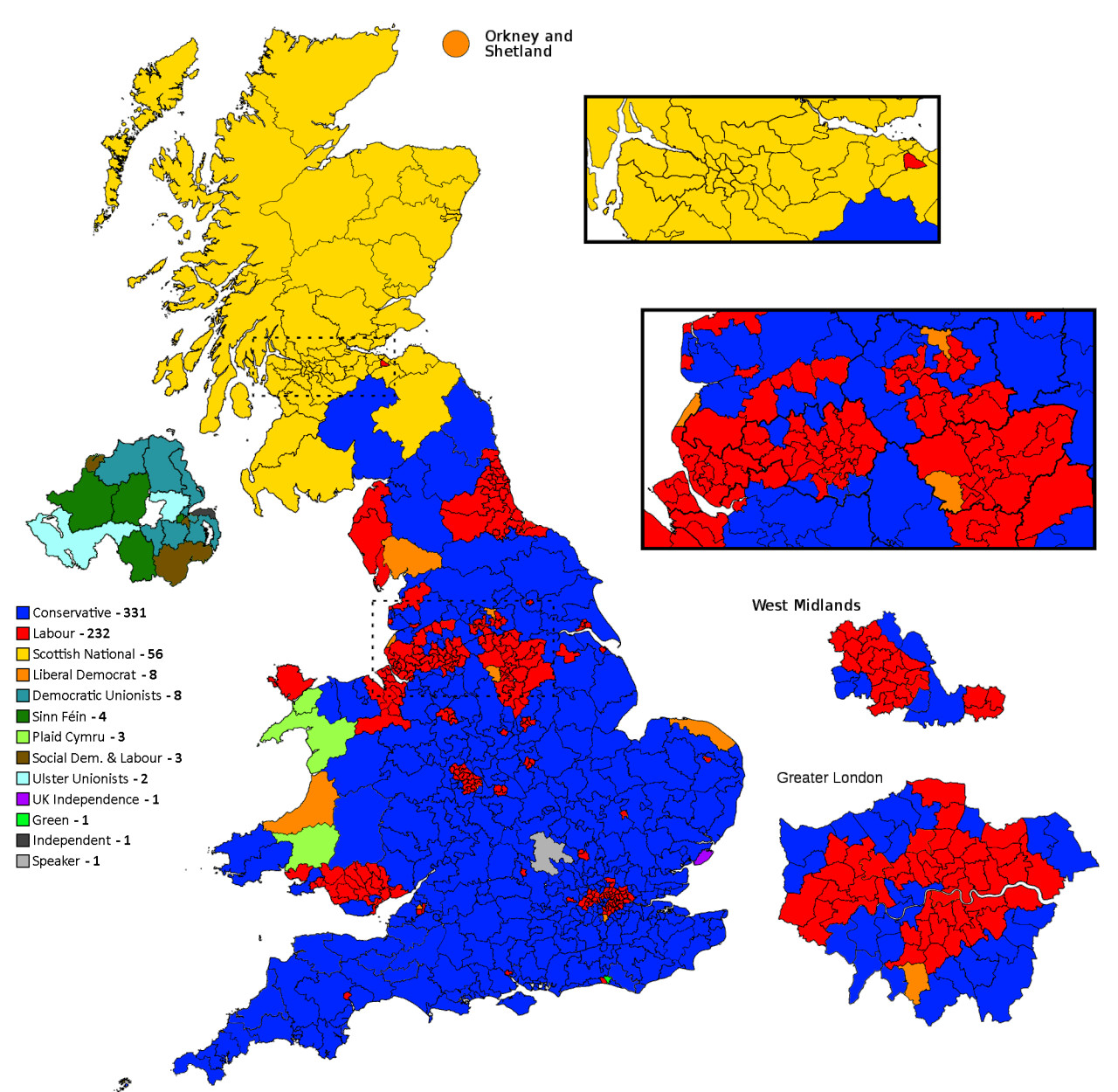 In my experience in the urban north especially, and among some suburban areas of intelligentsia, the Labour Party are incredibly nasty and authoritarian – though I believe the Lib Dems and Labour Parties have mostly cleaned up their acts a lot from how many of us behaved as activists in hotly contested elections say 15 years or twenty years ago. With exceptions, by the Labour Party who think like the Tories they have a God given right to win some seats, and sometimes by young activists who often make foolish mistakes which are dealt with by overreaction. I often found many Conservatives more moderate, friendly and with more of a sense of humour. But now anti-Europeans, anti-civil liberties, ideologues and nihilist type monetarists à la the ’80s will have more influence I am very worried. I support cutting back the State but I am also an old fashioned Keynesian who still supports a mixed economy, which works well in most countries in Europe. I’m telling people in Ukraine and Poland not to make the mistakes in privatisations that we did.

The polarisation that we see in our politics has been repeated in many countries across Europe in the last decade and more – with largely ‘centre left’ and ‘centre right’ parties evenly balanced in many contests from Britain to the Balkans, but with their supporters unwilling to recognise the legitimacy, and sometimes the right, of the ‘other sides’ arguments, and the public often failing to vote rather than vote for the Liberal parties that could help break the stalemate because they’re the ones who’ve been putting the arguments to do just that. In Britain the unhealthy right wing media domination has fuelled this polarisation – with that most sickening of papers, the Sun, pushing a nasty Little Englander bigotry in England and a populist nationalism in Scotland. The failure of mainstream parties firstly to articulate different political positions, or to work together for the common good, has driven many into the hands of the far right in Britain and far left and right in other countries. Yes an ideological Conservative cabinet is in place now but the Conservatives stood for election in Britain without any coherent intellectual platform. The press have helped fuel ignorance and cynicism of politics for years, but this election in my mind was the worst yet. The Wikipedia graphic on election endorsements shows just how biased our press is (even if Labour’s supporting corporate mag the Daily Mirror is just as bad as the main conservative press): https://en.wikipedia.org/wiki/Endorsements_in_the_United_Kingdom_general_election,_2015 5 major dailies Conservative, 2 Labour, 1 UKIP, 1 Lib Dem (though 2010 was more Conservative biased, while the the Guardian endorsed the Lib Dems: https://en.wikipedia.org/wiki/United_Kingdom_general_election,_2010 see Endorsements).

The daily character assassination of Ed Milliband who is an educated and decent person – constantly portrayed absurdly as some extreme left winger – was a record low for the British trashy press. As it happens, despite support for the New Labour project he was not at the heart of it, nor was Milliband obviously left wing, reasons why both factions within the Labour Party were very critical of him.

The reaction of the major Trades Unions to the Conservative win – confrontation and strikes, like their stance when the Coalition got in – is just as ideologically or selfishly pig headed as the Conservatives pushing forward plans to restrict the right to strike on utterly hypocritical arguments about democracy, that if applied to themselves would mean they would not be the Government, or many even MPs.

I think that problem is two fold – that the country is now incredibly polarised both geographically and between parties (many Labour and Conservative and SNP supporters seem unable to accept that their opposites have legitimate views). At the same time the Conservatives won the election with 37% of the vote with 2/3s of people voting. So A clear majority support other parties and the new Government will need to be conciliatory in some way towards them. David Cameron said he will strive to “bring the country together” but Mrs. Thatcher said that in 1979 and brought further conflict and discord. Can Cameron be better?

One friend, Paul Wesson, challenged my description of many Conservatives as anti-European. This was my reply:

“many people are anti-EU not anti-Europe, some of them for rational evidence based reasons, but the vast majority of people who are anti-EU are simply anti-Europe. They say anti-Europe (talking about the EU) but actually they say what they really mean. They are insular, narrow minded, turn the clock back blame foreigners and anything foreign they don’t like. Yes people were never given a vote on the EU political project. Yes I believe the starry eyed Eurocrats and politicians in Brussels are over centralising and out of touch. Like you it is obvious to see that they have failed to take people with them on a political project. I’ve argued like most Liberals for EU reform for a long time. At the same time anti-EU people like you and other friends have been predicting the same collapse of the Euro for 15 years and never acknowledge that it is one of the best and most trusted currencies in the world.”

The last line on the Euro does throw in a different issue, but is indicative of the fact anti-EU people never acknowledge the non-economic successes of the EU, such as the great benefits to education, travel and interaction, including the convenience and success to date of the Euro. €.

Why blame Labour for the General Election result?

“Don’t blame the Labour Party. Politics is about choices and consequences. The LibDems made a choice in 2010, they are now living with the consequences in 2015. No-one said politics is fair. History is riddled with good MPs who lost their seat when the tide of politics went against their party, the LibDems are no different.”

Why am I blaming Labour – or more precisely Labour voters? Because their tribal voting behaviour actually has twice delivered the result they feared. I saw this time as usual the futility of intelligent people voting Labour ‘to keep out the Tories’ in safe Labour seats (the Labour Party’s vote did go up) and yet Labour’s claim to be ‘better’ than the Tories (more principled) is foiled by supporters voting on grounds of narrow self-interest (like the activities of the major Trades Unions). I’ve written elsewhere about the successes of the Coalition and hypocrisy of the British public. A large section of the public have themselves to blame if they don’t like the election result. Coalitions are normal in other countries and deliver good government. X and Y Party and supporters don’t like Y or X Party forming a Government. Yet their answer is to perpetuate an unfair two party system. The Liberal Democrats delivered on many of their promises despite being a small partner. People always said they would not vote Liberal Democrat because they could not get power but when they did and delivered most people stuck or returned to voting on sectarian grounds. Tory voters feared some mythical ‘left wing’ Labour Party and now are likely to get a country and a continent riven by divides which shake the stability and economic confidence that they want.

On the day of the election I said: “Here’s hoping for a high turnout and a national inclusive dialogue after the election to get some priorities that everyone can agree on”

With minority support the Conservative Party MPs are doing the opposite.

The unfairness of the British electoral system.

Peter Tatchell has been prominent in the campaigning for electoral reform “At the May general election, the government won 51% of the seats based on 37% of the vote and the support of a mere 24% of registered electors.”

Greens fail to add to single seat despite highest-ever share of vote http://trib.al/h0K04EH

How many votes on average it took to elect an MP, as of 11am today. Via @electoralreform

“A Conservative majority is really bad given the ideological wing of the party.” This has proved true much more quickly than I expected, with the Conservatives moving to dismantle the restraints or positive measures that the Lib Dems put in place, and attack key British institutions like the BBC.

“David Cameron said he will strive to “bring the country together” but Mrs. Thatcher said that in 1979 and brought further conflict and discord. Can Cameron be better?”

Since I first posted these comments on social media after the election the answer to the last question is it seems not, so far.

I’d forgotten how unfair the 2010 General Election result was:

The Liberal Democrats actually gained 8 seats but lost 13. (I think 5 real gains, the others due to changed boundaries).

Even given the unfair voting system if only 9,000 votes had been different the Liberal Democrats would have won 10 more MPs in 2010, and another 35,000 votes another 10 seats. That is out of 29 million votes – less than half of .1% of the total vote. How different things could have been.

A letter to CAMRA – A policy we can all agree on.
A comment on Police and Crime Commissioner elections.