The picture below is of a remarkable report from the Guardian, from 1944, where a senior Liverpool judge takes a stand against racism. The defendant, George Roberts, (a West Indian helping the war effort and victim of discrimination) was represented by the Liverpool University Law graduate, and pioneering female barrister, Rose Heilbron.

Edward G. Hemmerde KC (1871-1948) was the Recorder of Liverpool, so the top criminal law judge in the city. The report, from the Manchester Guardian, was found and provided to me by Nicholas Willmott, bookdealer of Cardiff (and father in law). Nick had found a copy of Hemmerde’s excrutiatingly bad poetry in a charity bookshop in Newport so was researching just who he was. 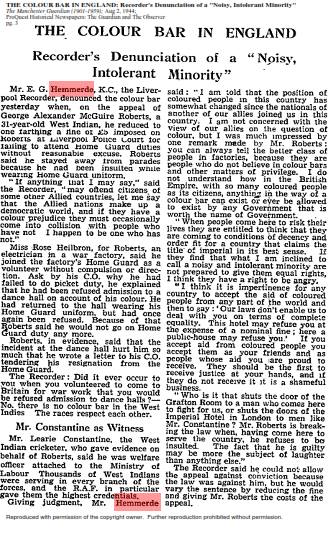 THE COLOUR BAR IN ENGLAND: Recorder’s Denunciation of a “Noisy, Intolerant Minority”
Source. The Manchester Guardian (1901-1959); Aug 2, 1944; ProQuest Historical Newspapers: The Guardian and The Observer pg. 3

What the In campaign is doing right and what it is doing wrong.
Edward G. Hemmerde KC; a note on the judge who stood against racism.