The British and the Second World War in Yugoslavia post.

Drove up to Niš to see this exhibition last week & delighted to get shown around by curator Boban Janković & see some of his military artefacts collection. Some real examples of derring do & even some SOE James Bond type gadgets. @almurray would like the exhibition [famous UK comedian and World War 2 history expert, Al Murray]. 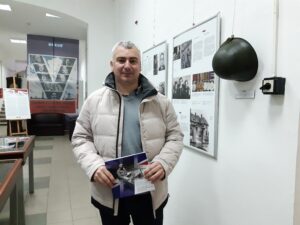 You can view much of the exhibition online here

The adventure of Captain Peter Wilkinson at the Three Kings hotel

and the ‘toys’ that Charles Hargreaves carried are especially amusing

I didn’t know that the Allies evacuated partisan wounded, or that Jugoslavia had Hurricanes & later given Spitfires.

With so many needless wars in the Balkans it still shocking that hundreds and hundreds of WW1 shells were dug up at Bitola in N Macedonia just months ago. *Actually from 23 November to 4 December over 1,000 74mm artillery grenades were found in excavations in the city park near the football stadium. The city Rescue and Protection Directorate had already removed 12,500 ordnance from the same location. The pretty little town of Bitola (Manastir in Turkish) was on the front line in Balkan wars and World War 1.

Definitely one for Dr. Jon Clarkson (a family doctor friend and WWII military history enthusiast). Curator Boban at the Историјски архив Ниш – Istorijski arhiv Niš Historical Archive Niš has I think he said over 800 military helmets from the early 2000s through both World Wars, Napoleonic, and even Medieval Serbian. He supplied some of the local items for this instalment of the travelling exhibition, and the Archive provided photographs of British officers in this third largest Serbian city after its liberation.

It is ironic that the only Ordnance Survey type map I have seen in Serbia, is a Ministry of War map in this display supplied to SOE officers, covering Niš down to Leskovac (a textile manufacturing centre known in Jugoslavia as little Manchester) which is a regional town in the area my office covers. Google Maps just is not comprehensive in Serbia and is totally not reliable in rural south Serbia. But there are no detailed paper maps – of course as everywhere in South Eastern Europe I’ve been local people don’t actually use maps.